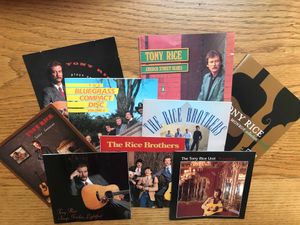 He influenced every acoustic picker we know, including Dave, who remembers having his mind blown hearing Tony gambol through a short, sweet solo on The Old Home Place with J.D. Crowe on a cassette tape back when Dave was touring Quebec with the White River Bluegrass Band.

We saw him a number of times in the 1990s at festivals like Winterhawk. On one memorable night, he turned up at a parking lot picking session that ended up with Jimmy Gaudreau, David Grisman and Jeff White. It was unforgettable, partly because it was so much fun, and because there were only a dozen or so people there to hear that amazing music.

Although he had health issues and never regained his voice after being stricken with dysphonian in the 1990s, his legend never diminished. Here`s the obituary in Rolling Stone.

And here he is playing and singing Church Street Blues, a song that Steel Rail used to do in the wayback.