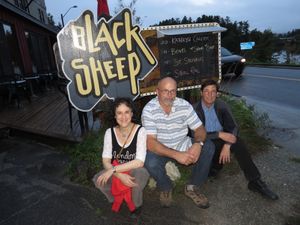 The band is still buzzing about Sunday's heartfelt, heartwarming concert at the Black Sheep Inn in Wakefield, Que.

It felt like family as we played for old friends and new fans in our first comeback concert outside Montreal after an eight-year hiatus.

There were old tunes -- like A Thousand Miles of Snow and Old Forgotten Road -- and new songs, such as Ellen's beautiful Once in a While, at one of our favourite venues, the Black Sheep Inn on the banks of the Gatineau River in Wakefield.

Among the attendees were some of the people who have been on the Steel Rail bandwagon right from the start, including Ron Moores of CKCU's Back 40 program, an early champion who has become a true friend. Ron's touching introduction set the stage for a concert that ranks high among all of the band's performances over the last quarter century.

Among the new songs at the concert: Once in a While, Winter Wren, Rain and When Are You Coming Home (by Ellen). Flow River Flow and Argyle Street (by Dave and Lucinda). More about those songs -- and the upcoming Steel Rail album -- soon.

In the meantime, thanks to everyone who came out on a soggy Sunday afternoon for the Black Sheep Show. Thanks to Ron Moores and Chris White of CKCU, important pillars for Canadian folk music. And a special thanks to Paul Symes and the pug patrol for decades of support for the Canadian folk and roots music scene. A continuer....