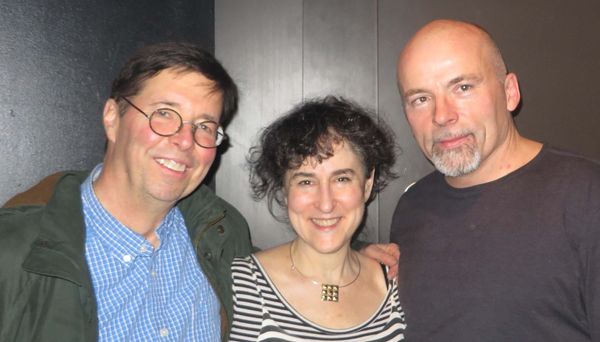 Dave, Ellen and Tod after the Wintergreen show: Tired but happy

Out of this world

Thanks to everyone who came out for last night's gig at Le Petit Campus -- it was a fun and slightly surreal night, given the party vibe on the Main, thanks to Les Nuits Blanches, Montreal's party-all-night winter festival. The last people to leave the gig, for instance, were ushered out by a tall green alien with bug eyes and a man in a white NASA astronaut suit. Truly.

Never mind the extraterrestres. The earthlings at the show, which was part of Montreal's prestigious Wintergreen Concert Series, gave Tod, Ellen and Dave (all also human the last time we checked) a very warm reception. They seemed pumped about both the Steel Rail chestnuts (Old Forgotten Road, Willow Creek and I'll Fly Away) and the new material that debuted at the show. Some of the most enthusiastic applause went to Ellen's plaintive new song When Are You Coming Home? which she wrote, with musical help from Dave, about his long absence in Western Canada. She dedicated the song to Dave's 80-something mother, who was enjoying the concert from a prime seat near the front (thanks, Matt!). Dave's mom later pronounced the concert a great success, although confessed that she might not be the most objective observer.

Another highlight was Argyle Street, a song about Halifax that was inspired by stories told by a band friend and Haligonian. The song features the lines: "Girls all have their best jeans on / Donna's hair is brown and long/ Charlene with her eyes so green / Prettiest one Evangeline." It was a treat to be able to dedicate the song to the Evangeline in question, even if the details of the barhopping trip to the real-life Argyle Street were a little fuzzy.

Other favourite moments: Dave's instrumental Sorrento and Ellen's beautiful new untitled song, a hymn to the human spirit. (Chorus: "The loving, the leaving, the hurting, the grieving, the light fading fast and the darkness receding..." if you are trying to place it.) And, of course, hearing the audience softly singing along to the chorus of That's How the Summer Slips Away, always a moving phenomenon.

Resolutions for the next concert:

In the meantime, our thanks to Matt and Rebecca, whose Hello Darlin' Productions presented last night's concert and whose presence on the Montreal scene helps keep acoustic music thriving in our city. Keep your ears open for news of this year's upcoming Folk sur le Canal festival, also powered by Matt and Rebecca. It takes place June 15 to 19 along the Lachine Canal and is not to be missed. 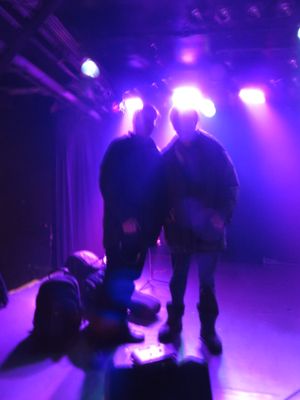 Not aliens: Just Dave and roadie Dan Sullivan striking the stage after the show